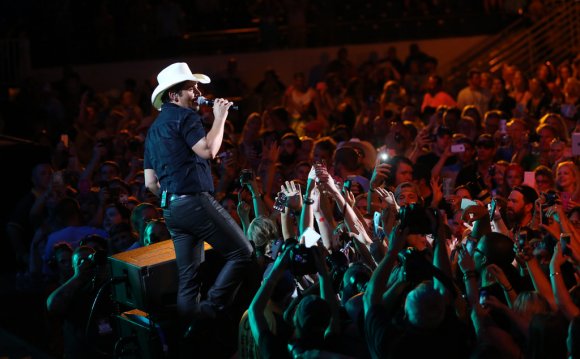 Mark your calendar for the 43rd Annual Telluride Bluegrass Festival (June 16-19, 2016). Tickets and camping are on sale now at shop.bluegrass.com or 800-624-2422. Check out our initial lineup including Neil Finn, Emmylou Harris, John Prine, Sam Bush Band, Bela Fleck & The Flecktones, the Telluride House Band, and many, many more...

Every June Festivarians and musicians from around the world make their annual pilgrimage to the historic mountain town of Telluride in the San Juan Mountains of southwestern Colorado. It's an unforgettable 4 days of music, mountains, and magic in the breathtaking box canyon at 8, 750'. Watch for the announcement of the preliminary lineup early this winter, after tickets go onsale on December 4.

The 43rd Annual Telluride Bluegrass is held the weekend closest to the Summer Solstice - the longest day of the year which begins the Colorado summer. It's a magical time of sun and light, when the the high country of Colorado puts away its skis and grabs hiking boots, guitars, and a low-back festival chair to take in "Bluegrass."

The 43rd Annual festival promises a magical four days of only-in-Telluride performances. Beloved Festival veterans and inspiring new talent. The Telluride royalty of virtuosic bluegrass superpickers, soulful songwriters, and some of the biggest stars in the rootsy Americana landscape and well beyond.

The festival is built around the many artists that have defined the Telluride Bluegrass sound, as the weekend is sprinkled with inspired sets from Peter Rowan, Béla Fleck, Jerry Douglas, Chris Thile, Tim O'Brien, and of course the "King of Telluride" Sam Bush. These artists come together for the festival's epic set from the Telluride House Band.

Performers say there is a unique thrill to performing in front of the smartest, most attentive audience in the country. Artists are encouraged to take risks in Telluride, and the Festivarian audience is regularly rewarded with unique blends of voices sharing the stage for the first time - as new musical friendships cultivated backstage make their debut on the Telluride stage.

With music on the main stage all day, intimate workshops on the Elks Park stage in the middle of town, prestigious band and songwriting contests, late-night Nightgrass concerts at every indoor venue in town, and jam sessions throughout the night in condos and around campgrounds, this is a week of uncommon musical riches.

“I feel like I grew up with the festival. It’s like a big family that welcomed me in.”

“It’s so ridiculous to just be in that valley, to look at those mountains. It’s inspiring and humbling to everyone.”

Listen to the mayor of Town Park, Telluride Tom, talk about the festivarian experience on Colorado Matters and join the year-round community in our Festivarian Forum, where there's an active thread right now about Festivarians' favorite Telluride memories.

Nestled in the rugged San Juan Mountains and surrounded on three sides by the natural architecture of the Telluride Box Canyon, Telluride is arguably the most spectacular town in the American West.

Founded in 1875, the Victorian charm of the town is protected as a National Historic Landmark District. The town of Telluride (elevation 8, 750') is connected to the modern resort community of Mountain Village (elevation 9, 450') via a free commuter gondola.

The San Juan Mountains are the highest concentration of 14, 000 mountains in the US. Activities in and around Telluride include mountain biking, hiking, horseback riding, numerous hot springs, historic ghost towns, and whatever else your sense of adventure shows you. Popular hikes from town are the Bridal Veil Falls - the highest cascade in Colorado - and the 2-mile hike up to Bear Creek Falls beginning right behind the festival stage.