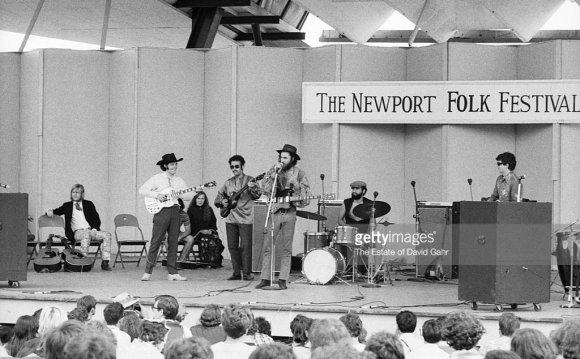 "psychedelic" as a musical genre is often associated with "mindexpanding experiences", which are absolutely not necessarilly drugs-experiences. There are musical effects used, to express such an experience. In acoustic music, this could mean a somewhat open tuning and freedom for jamming improvisation, or even when there are casual semi-eastern / middle eastern influences to make an intuitive feeling of open tuning. I prefer to use the term 'folk-psych' when the starting point was psych and not acoustic music, while 'psych folk' has a starting point of folk.

Acid Folk : At first I prefered to use this term especially for acoustic music which doesn't reproduce or start from traditional elements, but where it re-invents an acoustic folk like style structure, without being experimental in harmonies or melodies. Most of the time the style is a very personal expression for the specific group who reproduces it. Of course preferably, like in the usual sense, there must be some "acid" of the inspirations, a deeply inspired mind-freeing experience involved with it to really justify the use of the term. If it is rational new music, it might be better to use contemporary folk (for more sober examples) or nu-folk (for acoustic inspirations that use an awareness of new techniques, of their being in this present world), or chamber-folk for very arranged new contemporary folk music.

There has been a time when the term Acid Folk was used for some folk-rock groups who were somewhat reinventing the traditional tunes, but I think this isn't the case any more nowadays, or nobody is still using it this way. The intention in "Acid Folk" was not to sound deliberately psychedelic, but the content of it is as expressive as this, or can still be mindexpanding in some way or another. See also wyrd folk->

Progressive Folk : When the "progressive" elements are very well worked out in instrumentation, but the basic use of accoustic instruments is still important this term could be used. When the 'progressive music' is a foundation for the music I prefer to use the term 'folk progressive' in stead.

Lo Fi : as opposite of the 'High Fidelity sound' this refers to home made recordings (: in the kitchen, the bedroom, or small studio) of a poor quality in sound, but with a certain spontanuous nature. This genre wanted to grip the unique moments in such way. Some timide and technically not so well crafted musicians could use this medium as an excuse too. Some whispery homerecorded acoustic items are called bedroom folk.

Traditional Folk Music : There are a few traditions which are used more often like Celtic, Irish, Scottish and perhaps tunes from the Middle Ages. Last category of medieval music I prefer to list mostly seperated. Then it is cold mostly Old music or even better Ancient Music. It's not easy to trace dates of origin of various of the traditional tunes. Groups in the category of "traditional folk music" could be purist towards the use of instrumentation -(so more "roots" orientated)-. If not too common just the term 'folk' as such is mentioned. Within traditional Folk Music there are many styles which almost never crosses its borders towards the other genres. Genres like 'Cajun' received their own category in libraries, not because of their true importance, but because of these genres have a mentality that keeps them easily within its own limitations, just like the 'state' would prefer to see people to be as conservative like that (no matter if there's original fine music in the genre or not) as being predictable. Traditional music performed from the book without new creativity or reconsideration of their stylistic approach is considered as being 'roots' music. Also blues and bluegrass are often categorized often as a roots form. Appalachian music is often a traditional form of music that has become a new living tradition which is already different from the originating traditional music.

New-..or Modern : I used as a category when it fits in recent kind of production / atmospheres / modern moods but whatever that is. Compositions as serious as 'new classical music' can of course be called "contemporary". Nu-folk also adapted the latest techniques, awareness of instruments, and so on..

Neo- in general and for any other genres is be used when it describes music that has references to the original success of mentioned genre (in 50's, 60's, 70's..) at the time when it was at its most inspired. The neo-genres often uses a kind of 'melodic' memorization, often forgetting that a more simplified use of synthesisers might give the neo- idea something of a "lost" genre creativity. The neo-composers in general have often more attention to composition than they still create inspired and spontanuous music from the heart or the soul no matter to which style this would lead. In neo-folk the 'memory of what can be folk as well' often led to a kind of Gothic minimalistic kind of folk style, often produced by 1 or 2 persons only. It's a darker style, with some interesting items. Neofolk searches for traditions after having lost them or express this feeling of loss. It tries to make their roots and feelings anew, on their own. The neofolk genres are so far often more minimal and feel a bit depressing or darker.

Free Folk and Avant Folk are sometimes used as fusions between 'Free Music' and 'Avant Garde' Music and Folk. This is different as psychedelic or progressive music and uses the creating of new sounds as an experiment rather than the accidental new sounds which come forth from any mind expanding experience in the first place. Accidentilly the effect can be somewhat the same.

Pop- as a category is being used by me when repititive rythms and song writing leads. Progressive as a subcategory has its roots in the seventies. Those days pop crosed their borders musically. Longer tracks, instrumental improvsations are allowed and progress the musical basic content.

Wyrd Folk is a recently new defined category. It's something like acoustic music with an open, intuitive idea.. It can be acid folk music with "musical" opening, purity, honesty, etc. without that it necessarilly has to be psychedelic or completely free. I agree with the usefulness of this recently invented term. However, it lead to the use in media of the term "weird folk", which I think should better only used for what s really "weird", and which has a sort of new hippie fashion or attitude.

Experimental folk is a recent genre. Groups within this genre use sound experimentation as having and creating its own structure. It's very improvised. I don't think all people within this category play their instruments equally well, or that it is always so bright as being intended. The sphere/mood is often more important than the skiful unique improvisation. I hope when such a group uses drones there's enough complexity with the overtones. Other terms used are Drone-Folk. Accoustic experimental sound collages for me is just acoustic experimental music. Jammed acoustic psychedelica is different from this.