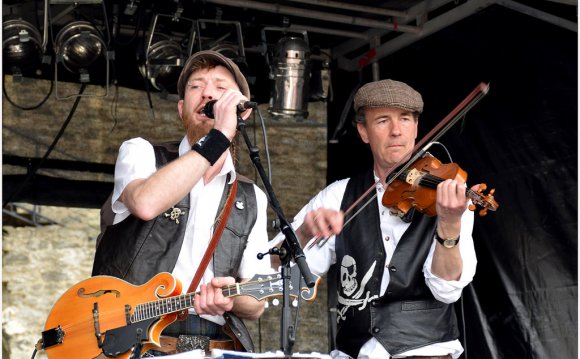 MalicorneWas a French electric folk group that flourished in the 1970s.

Gabriel Yacoub and Marie Yacoub formed Malicorne on 5 September 1973 (possibly naming it after the town of Malicorne in north-western France, famous for its porcelain and faience).Gabriel had been a member of Alan Stivell's band, playing folk-rock based on Breton music. He sang and played acoustic guitar, banjo and dulcimer with Stivell, appearing on his 1972 "A L'Oympia" live album and 1973's "Chemin de Terre", before leaving to form his own band, intending to popularise French music the way Stivell had popularised Breton music. Since several of their albums are called simply Malicorne it had become the custom to refer to them by number, even though no number appears on the cover. Malicorne 1 consisted of the Yacoubs, Laurent Vercambre and Hughes de Courson. The combination of electric guitar, violin, dulcimer, bouzouki and female vocalist immediately brings to mind Steeleye Span, their English equivalent, thus placing them squarely in the electric folk genre. These four musicians were, between them, masters of twelve instruments. Their first four albums consisted of mostly traditional French folk songs, with one or two songs by Gabriel Yacoub and one or two instrumentals per album. Again like Steeleye Span, they occasionally sang group harmonies a cappella. On Malicorne 4 they were joined by Olivier Zdrzalik on bass, percussion and vocals. The exuberant art-work on the album sleeves, featuring elves and dragons, makes them collectors pieces.

L'Extraordinaire Tour de France d'Adelard Rousseau (1978) was very much a concept album, concerning a guild craftsman's travels around France, with an implied spiritual exploration. It is perhaps the most exciting of their albums, with some gothic and prog-rock elements in the music. Like their next album Le Bestiaire, it consists mostly of songs by Gabriel, with a few by Zdrzalik and de Courson. The range of sounds of these albums is huge. Their appeal goes beyond the French-speaking world, and still gives them a dedicated following, but most of the albums are only sporadically in print. Some sections are clearly classical music, but electronic wizardry and bagpipes also appear.

The size of the band grew to 12, including at one point, Brian Gulland from the English group Gryphon. Their commercial success enticed them into pure pop. Balançoire En Feu (1981) was a disappointment to many. Les Cathédrales de L'Industrie (1986) began with an epic folk-rock track. One of the other tracks, "Big Science 1-2-3" is in the style of Peter Gabriel, Laurie Anderson or Gary Numan. They disbanded shortly afterwards.

Once they had gained a reputation in France, Malicorne toured in French-speaking Canada. The album En Public (1978), recorded live in Montreal, makes it clear that they were more than a studio band. They toured over 800 venues in Canada, America, and Europe. In 1990 Gabriel and Marie appeared as a duo in a low-key event in London. All of Malicorne's songs were in French, apart from a few words of English on their final album. At their concerts they made some announcements in broken English. Gabriel and Marie continue to record, but their CDs are only occasionally in print. The three compilation albums Quintessence, Legende and Vox show the range of Malicorne's work. A compilation of Malicorne tracks, featuring only those sung by Marie, was issued in 2005, Marie de Malicorne. Malicorne reunited in 2010 for an appearance at the "Festival des Francofolies" at the Grand Théâtre de la Coursive in La Rochelle. A CD and a DVD of the performance were released in March 2011.

pwc worldwide tax summaries how to create a business outdoor dining near me how to like a facebook page from your business page 2020 how to set up a business email with gmail how do i find the rateable value of my business property how to start cargo business in uk similar to the society in 1984 crossword clue coworking space hammersmith reindeer lights outdoor lasswell's model of communication stylish furnitures aldi christmas opening hours nationwide building society address cheap stylish clothes humane society international international yoga day communication and influencing examples stylish wall lights how to right a business plan facial expression in communication "intitle:""index of"" bring it on worldwide" what is e commerce business coventry building society reviews how to start a card making business international reaction to england win over ukraine why trust is important in business marketing coworking space international fc stylish rain hats christmas tree collection what can i do with a international business degree dudley building society
Source: en.wikipedia.org