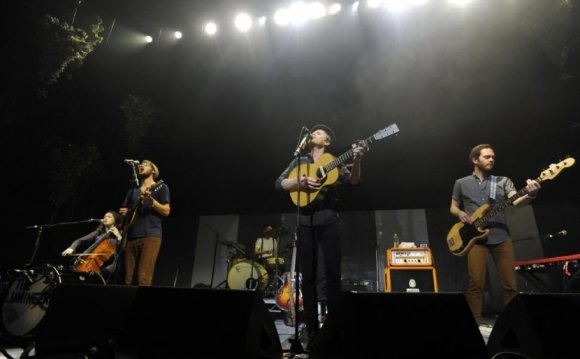 Few voices are more vital in today's musical landscape than Hozier's. It's a small miracle that his epic "Take Me to Church" has become as big a hit as it has. And his most recent cover is only further proof that he's one of the most innovative artists in music right now. Friday, he stopped by BBC Radio 1's "Live Lounge" and performed an awesome cover of Ariana Grande's "Problem." He turns it from bubblegum pop into some truly nourishing folk and soul.

What's new: The Irish pop star makes a number of heartening updates to the track. He swaps the awkward whispered choruses and replaces them with full-bodied harmonies. And what's best, he replaces Iggy Azalea's underwhelming rap verse with Nate Dogg's verse from the Warren G's classic "Regulate." Hearing Hozier croon "If you know like I know / you don't wanna step to this / It's the G-Funk era / funked out with a gangsta twist" with that soft Irish lilt is an absolute joy.

His deft manipulation of all these pop tropes proves once again why Hozier is such a necessary voice in pop culture. His hit "Take Me to Church" didn't receive the huge promotional media blitz that most up-and-coming pop names enjoy. It only had a powerful video, connecting the song's inspiring message to the anti-gay rallies occurring in Russia at the time. The song's substance helped shoot it to the top of the charts over any formulaic sound or marketable aesthetic.

What's next: Now Hozier's set to clean up at this year's Grammys. His song "Take Me to Church" is up for Best Song of the Year and has a solid shot to win. Whether his victory will radiate out and help make the rest of the pop world a little more conscious remains to be seen.

"I don't know if I can change it, " he recently told the . "I write things that I feel strongly about. I do find that I just don't connect with a lot of themes that come through the Top 40. There's just so much superficiality in what you hear on the radio nowadays. That's fine. That's reflective of our culture and of society."

It's a sad truth, but we should still try to aim higher. And Hozier's constant risk-taking is a perfect role model.