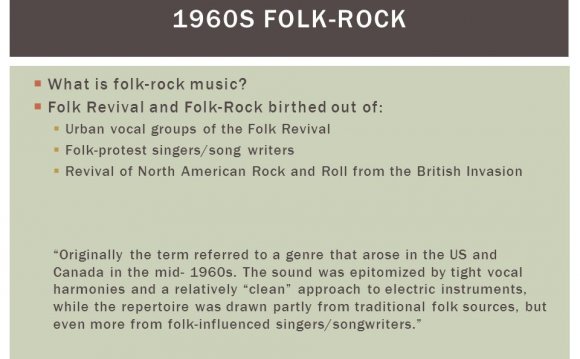 Definition:During rock and roll's initial rise to national prominence, it was considered a music for teenagers strictly - college students, having come of age in the immediate postwar era, preferred the more serious, culturally "authentic, " and socially aware sounds of folk music. But that all changed in the mid-Sixties, when the first rock generation became old enough to invade America's colleges, and as the famous "stairwell" scene in Animal House makes clear, these freshmen considered folk a music for squares.

However, musicians who kept their ears open loved both sides, which resulted in the inevitable creation of folk-rock.

The Beatles, inspired by Bob Dylan's introspective songwriting and their own jangly, chiming electric Rickenbacker guitars, began writing pop songs with a decidedly folky edge as early as 1964, inspiring a West Coast group called the Byrds to experiment with a similar style. The Byrds' electric cover of Dylan's "Mr. Tambourine Man" set off the initial explosion of folk-rock in the summer of 1965, which in turn led to folk groups like Simon and Garfunkel having rock instruments added to their trad tracks (a move made behind the duo's back, yet resulting in the smash hit "The Sounds Of Silence"), as well as pop groups, mostly on the West Coast, covering Dylan songs for hip cachet (most notably the Turtles and Sonny and Cher).

In turn, Dylan himself "went electric, " leading folk purists to unfairly brand him a sellout and, in one infamous incident at Manchester's Free Trade Hall in England, a "Judas." Dylan went on to define folk-rock's parameters and then, arguably, transcend them, leading the crowd as usual when he suddenly decided to "go country" at the end of the '60s.

Though the initial folk-rock explosion only lasted a few years, being absorbed into the other collegiate rock genres that would all morph into "classic rock, " it nevertheless had a lasting impact on pop and rock, resulting in sunshine pop and the development of the Los Angeles singer-songwriter scene that would come to dominate the coming decade.

In the coming years, folk-rock had possibly the greatest role in helping to popularize the mix of American roots music which would become known as "Americana."

The song which cemented Dylan's and folk-rock's legitimacy once and for all, keeping the storyteller's nature of folk while bringing in a poetic, generational stance that could only be associated with rock.

A Pete Seeger adaptation of a Bible verse from the book of Ecclesiastes becomes, in the Byrds' hands, a chiming hymn to peace and the importance of its preservation.

They'd introduced the Rickenbacker 12-string guitar to rock, and had already experimented with its beauty, but after the Byrds fired their initial folk-rock shot, the Beatles responded, lovingly, in kind.

This former rock n' roll duo had intended to go straight into folk, but when producer Tom Watson heard this song was tearing up Ivy League collegiates, he decided to make it mainstream, adding drums and electric guitars inspired by the Byrds. Suddenly the duo were locked in for life.

It started as a Kingston Trio original, but the We Five proved it had pop potential, and even though the Youngbloods' version didn't burn up the charts during the Summer of Love, its use in a TV public service announcement two years later gave it new life.

He was originally a Woody Guthrie acolyte, then a Dylan protege of sorts, then came under the Beatles' wing. But this anthem to a Utopia that had disappeared forever was pure folk-rock - and it ironically worked as a elegy for the death of the hippie dream.

The first folk-rock song to prove its efficacy as a medium of instant protest, this "one-hit wonder" by an incredibly influential folk-rock band was a direct reaction to the unease in the wake of 1966's infamous Sunset Strip riots.

Proving that the genre could be lighhearted as well, the Spoonful came from more of a "jug band" mentality but also loved "rhythm and blues, " both of which are mentioned here as a paean to the power of positive rock.

The Byrds weren't the only band that could turn Dylan's intricate, romantically complex and difficult songs into pop gold, and they injected a little West Coast sunshine pop into what is, beneath, a classic kiss-off.

The First Family of West Coast Pop developed their unique harmonic style on this dark ballad, which sounds as forlorn as any hobo's tale but yearns for that shining city on a hill. Well, several hills, actually.