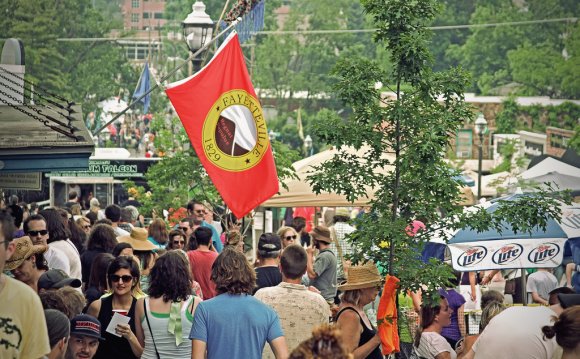 The last thing Chicago really needs at this point is another summer music festival. In 2015, the city welcomed Mamby on the Beach and Ruido Fest to the already-crowded calendar of weekend events. Now, concert promoter Live Nation has unveiled yet another three-day festival, called Chicago Open Air. The event will take place in nearby Bridgeview at Toyota Park from July 15–17 (the same weekend that Pitchfork Music Festival traditionally occupies) and, according to a release, will feature "more than 60 rock music artists, an outdoor Gourmet Man Food and craft beer village and other entertainment."

No musical acts have been announced (the festival will reveal a headlining act on February 9), but we can make some assumptions about the lineup based on the involvement of festival producer Danny Wimmer. Wimmer's production company, Danny Wimmer Presents, is responsible for booking modern rock festivals such as Rock on the Range in Columbus, Ohio and the Aftershock Festival in Sacramento, California. This year's Rock on the Range lineup features Red Hot Chili Peppers, Disturbed, Rob Zombie and Five Finger Death Punch, so similar modern rock bookings for Chicago Open Air seem likely.

Music may be the main attraction of Open Air Chicago, but organizers have seemingly invented an entirely new cuisine to be served at the festival. Food set to be available at the event is being billed as "Gourmet Man Food, " which the festival's Facebook page claims "has been part of American culture since pioneers started experimenting with their cowboy menus to kick it up a notch." Sure, whatever.

Chicago Open Air seems to be filling a void in the city's festival market, positioning itself as an event that will bring modern rock and metal acts to the city. Admittedly, there isn't another Chicago event that does this on a large scale, so the organizers are probably onto something. Festivals like Spring Awakening have proved there's a market for events that target a demographic interested in a specific genre of music. If nothing else, Chicago Open Air promises to be a brilliant piece of Pitchfork Music Festival counter-programming.

Great music festivals coming up in Spain for summer 2013