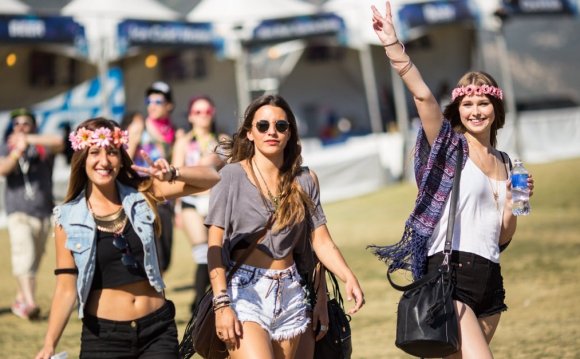 A giant caterpillar moves through the crowd on the first day of the Coachella Music Festival in Indio, California on April 10, 2015.

When American music festivals got their start five decades ago, fans paid $6 for their fill of peace, love and rock 'n' roll.

But those hazy days of the '60s have given way to something much larger with brighter lights, bigger crowds and booming business, CBS News' Adriana Diaz reports.

Some 32 million Americans attend at least one music festival each year, and they are part of the $6 billion concert industry in North America.

Lollapalooza is a festival pioneer that Jane's Addiction frontman Perry Farrell launched in 1991.

He wanted to create a live experience that reflected people's playlists.

"It's not about one headliner. It's about your personal selection of music, " Farrell said. "You probably have on your computer or your phone now 100 songs that you love, right? Well that's what we have here."

"It's a great chance to kind of play to some people that are maybe seeing you for the first time, " he said. "The diversity at a festival is now something not only people expect, it's something they depend on."

Diversity that now includes DJs. The sea of Coachella fans swarmed the stage for Kaskade, a 44-year-old Mormon and father of three.

"The growth of festivals right now is insane, I can't keep up with it, " he said.

But he is taking advantage of it. He played a festival every weekend this summer.

Artists are also trying to counter the 67 percent decline in album sales since 2000. That's why the Cold War Kids played festivals before they even had an album 10 years ago.

"We started at the time of Myspace. I don't know if we ever thought about making money off of physical sales of music. It's just always something that we've accepted, " frontman Nathan Willet said. "Festivals are a huge part of why we can exist."

But they don't come cheap. A one-day pass at Lollapalooza costs $110. A three-day VIP ticket at Coachella costs almost $900. On top of that, corporate sponsors spend $1.34 billion to be where consumers are.

"Back in the early '90s, to have sponsorships was frowned upon, " Farrell said.

"So I resisted to doing it. Other festivals started to come up, and they were using sponsorship to get the acts that I wanted, " he said. "I had to jump in there and come up with some clever idea. I look at it like it's a racecar. Racecars have sponsors all over them, right? So that's how you have to look at it."