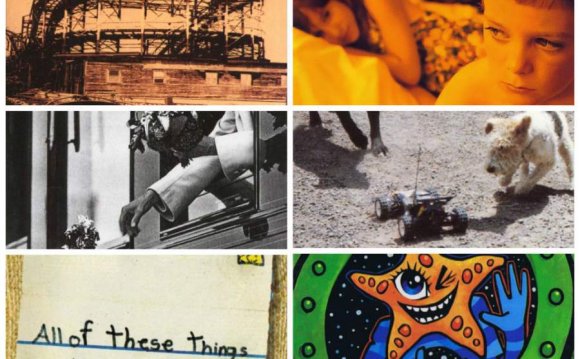 Bob Dylan and Bruce Springsteen perform during a Rock and Roll Hall of Fame show, Sept. 1, 1995. — Photo by Neal Preston/Corbis

Summer is a time for music festivals and memories of songs and albums from our past. With that in mind, we look at nine uplifting folk-rock albums that we think do what folk-rock does best — blend evocative storytelling with some rock 'n' roll. It doesn't hurt that the personalities behind them — Springsteen, Dylan and the like — are the ones telling the stories.

Below is our list of albums plus a favorite song. Tell us whether you love them or loathe them by leaving a comment on the bottom of this page or visit the messages board):

Bob Dylan — Bringing It All Back Home (1965). Track that will improve your life: "It's All Over Now, Baby Blue"

This was Dylan's first album to mix folk with rock 'n' roll. Though the LP seemed to devote one side to each genre, never had there been rock as lyrically ambitious as the frantic "Subterranean Homesick Blues, " nor folk as texturally sprawling as "It's Alright, Ma (I'm Only Bleeding)." For my money, this is Dylan's most accessible album.

Its best-known song, "Mr. Tambourine Man, " would feel equally at home on pirate radio or at a middle-school dance. The rock sizzles, while the folk goes deeper than anyone had before — including Dylan himself. Just listen to how he captures the end of a relationship in "It's All Over Now, Baby Blue": "The vagabond who's rapping at your door/ Is standing in the clothes that you once wore./ Strike another match, go start anew, / And it's all over now, Baby Blue."