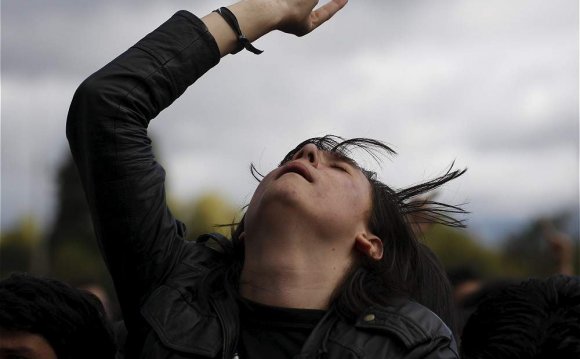 It was one of the great rock festivals of all time. With the backing of a major television network and an eye-popping lineup, the California Jam, which took place on April 6, 1974, has, over time, built up a reputation for being one of the best and most smoothly run music festivals in rock history.

After the tragic murder of Meredith Hunter at the hands of the Hells Angels at Altamont in December 1969, many wondered if it was the beginning of end of the big music festival. A few more large-scale events were staged in the years immediately following Altamont — most notably the Atlanta International Pop Festival in July 1970 and at the Isle of Wight in the U.K. a month later — but for the most part, the multi-bill, extended rock concert was marching toward extinction.

What is considered to be once of the last of the great late-‘60s/early-‘70s rock festivals took place in Ontario, Calif., in April 1974. Produced by ABC Entertainment, the California Jam set records and precedents that are still the envy of music festival promoters today. The lineup was staggering, featuring performances by Rare Earth, Deep Purple, Earth, Wind & Fire, Black Sabbath, the Eagles, Emerson, Lake & Palmer, Seals & Crofts and Black Oak Arkansas.

Overall. 250, 000 paying fans made the trek to the Ontario Motor Speedway for the one-day event. What’s more, all of those in attendance were able to actually hear the music being played thanks to the installation of what was then the loudest amplification system ever created put in place around the stage. The festival was so successful that a second installment was thrown in 1978.

The backing of a major corporate entity brought a myriad of changes to the accepted outdoor festival model in the hopes of actually turning a profit. The entire show was filmed and broadcast live on television and radio across the country for those who couldn’t see it for themselves in person. Deep Purple’s set would later become the first full-length concert to be sold on VHS (and was eventually issued on CD). The amenities at the venue itself made Woodstock look like a POW camp and perhaps most shocking of all, it ran on time.

In fact, the only black mark on the California Jam through the years has been the behavior of Deep Purple, who, as the second-to-last act on the night, followed Black Sabbath. Guitarist Ritchie Blackmore chose to mark the otherwise celebratory mood of the occasion by throwing guitars and equipment into the crowd and attacking a camera that got in his way. A pyrotechnic effect later blew up one of his amplifiers causing the stage to catch fire, which was thankfully put out before any real harm or damage could be done. After their set was over, Deep Purple climbed aboard helicopters and high-tailed it out of Speedway leaving Emerson, Lake & Palmer to pick up the pieces.

While not as renown as some of the bigger festivals that came before or after, the California Jam presented a real turning point in the history of rock. It marked the beginning of corporatization of the live, large-scale music event which reached its nadir with Woodstock ’99 and the end of the free-form, “if we make money great, if we don’t, we don’t” iconic events that are remembered so fondly today.