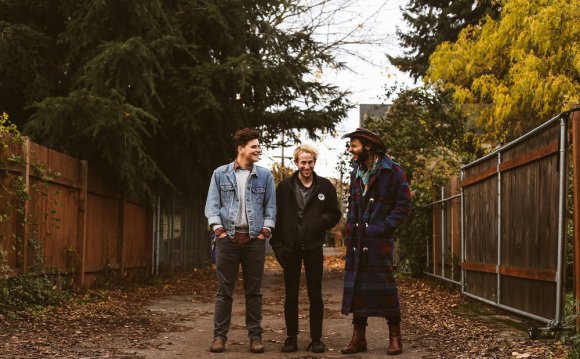 2014 saw the release of tons of great albums, but 2015 has even more in store for indie music fans. After the success of Modern Baseball’s ‘You’re Gonna Miss It All’, Hozier’s self-titled debut album, Walk the Moon’s second album ‘Talking Is Hard’, and The Rural Alberta Advantage’s third album ‘Mended With Gold’ – to only name a few – indie fans had something to look forward to during seemingly every month of the year. The same is true, even more-so, in 2015. From indie pop to indie folk, listeners have a huge variety of music to listen to this year. Let’s get to it, here are the top five indie albums releasing in 2015.

Made famous for their heart-warming lyrics and crazy vocal effects, Passion Pit have established themselves as one of the top indie pop bands of the 2010s. Lead singer Michael Angelakos has a knack for writing catchy tunes with deep meanings, and ‘Kindred’ looks to build upon previous success. Earlier this week, the single versions of ‘Lifted Up (1985)‘ and ‘Where the Sky Hangs‘ released – and did not disappoint. ‘Lifted Up (1985)’ has the catchy chorus to get listeners to sing along and subtlety beautiful verses to become the next ‘Take a Walk‘, while ‘Where the Sky Hangs’ changes things up by featuring Angelakos’ voice, for the most part, without added effects. And really, how can a song not be great when it’s titled something so beautiful like ‘Where the Sky Hangs’. ‘Kindred’ releases on April 21st, but fans will be singing along to ‘Lifted Up (1985)’ and ‘Where the Sky Hangs’ long before that day.

The huge success of ‘My Head Is An Animal‘ led to worldwide fame for the indie folk band from Iceland. Of Monsters and Men use a variety of metaphors and instruments to tell stories with very impactful meanings. Back in 2013, the band announced they were to begin working on a new album in August. The band began recording the new album in November of 2014, and it’s now slated for release on June 9th. The quintet hopes to expand on their next album, as the process of writing while on tour is something new. The first single, ‘Crystals‘, was released on March 17th, and early signs point to a successful sophomore release. If the ‘Beneath the Skin’ is half of what ‘My Head is an Animal’ is, fans should be very satisfied.

Often grouped with Of Monsters and Men because of their folk roots, The Lumineers have a unique sound that, combined with catchy lyrics, has fans very excited for a new album. One of their new songs, which seems to be titled ‘Falling‘, features cellist Neyla Pekarek as a singer. Pekarek has an outstanding voice that goes perfectly with lead singer Wesley Schultz, and the delightful piano tunes from Jeremiah Fraites. If ‘Falling’ is any indication of where the next album is headed, The Lumineers should continue their reign as one of the top indie folk bands in the world. The band started working on their new album late in September of 2014, so a late 2015 or early 2016 should be plausible (let’s hope 2015 – for the sake of this article, and our ears).

Ever feeling down about life? Listen to The Mowgli’s! Their message that “love is gonna save the world” is something everyone can relate to, and can provide a pick-me-up to anyone – no matter what music they like. The fun loving nature of their debut album ‘Waiting For The Dawn’ had fans across the country singing and dancing along for months. Whether you’re driving or sitting in a dorm room, The Mowgli’s can change the mood of any situation – in a good way, of course. Two songs, entitled ‘Through the Dark‘ and ‘I’m Good‘ from the forthcoming ‘Kids in Love’ were released early in 2015, and continue upon the giddy melodies and lyrics from ‘Waiting For The Dawn’. ‘Kids in Love’ comes out on April 14th, and is the perfect album to kick off spring.

Oh The Vaccines. Widely regarded as one of the most dynamic bands for their ability to change their sound between albums and EPs, lead singer Justin Young said he hopes that the forthcoming album ‘English Graffiti’ will be so genre defining that it “will sound terrible in ten years”. No matter what they sound like, fans can expect catchy, meaningful lyrics filled with a wide range of emotions. ‘English Graffiti’ also features the song ‘Dream Lover’ that, Young said, “is the biggest song we’ve ever written.” ‘Dream Lover‘ can be found from a variety of concerts on YouTube, but the videos don’t give credit to what the song will be in the end. Other songs include ‘Radio Bikini’, which is a response to The Dead Kennedy’s classic, ‘Holiday in Cambodia’; Young says ‘Radio Bikini’ is “about the bombing of Bikini Atoll [after World War II] disguised as a song about summer.” ‘English Graffiti’ is slated to release May 26th, but if can’t wait, you can listen to the single version of their song ‘Handsome‘ now.

From ‘The Lumineers’ to ‘The Mowgli’s’, music fans everywhere have something to look forward to in 2015. Let’s hope for a great year, and if not, at least the music will be good.