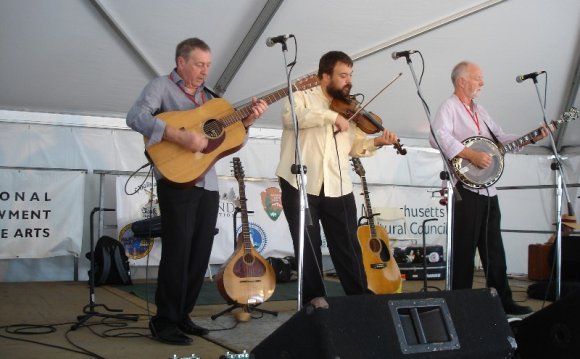 "The unconscious music of the folk has all the marks of fine art: that it is wholly free from the taint of manufacture, the canker of artificiality; that it is transparently pure and truthful, simple and direct in its utterance." So wrote Cecil Sharp in English Folk-Song: Some Conclusions, published in 1907. This powerful, often passionate tract was the first systematic attempt to anatomise the nature of folk music and song in the British Isles, and marks the moment when "folk" began to detach itself from the unmediated flow of oral culture and permeate British cultural life in subtly invasive ways.

"Free of the taint of manufacture" – that phrase, in particular, is heavily loaded with the ideology of what the Victorian socialist William Morris called the "anti-scrape", or an anti-capitalist conservationism (not conservatism) that solaced itself with the vision of a pre-industrial golden age. In Britain, folk may often appear a cosy, fossilised form, but when you look more closely, the idea of folk – who has the right to sing it, dance it, invoke it, collect it, belong to it or appropriate it for political or cultural ends – has always been contested territory. After all, the great age of folkloric retrieval is synchronous with the age of Karl Marx, and many of the links in the chain of tradition since the mid-Victorian era have been forged by those who have considered themselves revolutionaries.

Interest in folk music and other buried aspects of national culture tends to be reawakened at moments when there's a perceived danger of things being lost for ever. Successive folk revivals of the 20th century drew their impetus equally from the two historical landmarks that most permeate the British collective unconscious: the industrial revolution and the first world war. In the late 1960s and early 70s, fear of annihilation, technological progress and a vision of alternative societies filtered through popular and underground culture, conspiring to promote the ideal of "getting back to the garden". Folk is only one of many ingredients in the mix during these charged moments: psychedelics, environmentalism and the political and energy crises of the early 70s all played their part too.

In our own time, though, the word "folk" no longer refers solely to particular songs and melodies attached to the ancient lore of the land, nor to techniques of singing, instrumentality and delivery, nor to the idea of particular music belonging to small, often rural communities, or even a nation. Folk still includes these preserved traditions, but it is also applied to areas of contemporary music, to composers of personal songs such as Nick Drake, Sandy Denny or John Martyn, or more recently Fionn Regan, Alasdair Roberts or Eliza Carthy. Nowadays it's become as much a signifier of texture and aesthetics as an indicator of authenticity – as in such descriptive terms as "acid folk", "free folk", "wyrd folk", "anti-folk" and even the ungainly "folktronica".

Folk has achieved the rare distinction of occupying fashionable and unfashionable status simultaneously. Just as the effusive floral prints of the radical William Morris now cover genteel sofas, so the revolutionary intentions of many folk historians and revivalists have led to music that is commonly regarded as parochial and conservative. And yet – as newspaper columns periodically rejoice – folk is hip again, influencing artists, clothing and furniture designers, celebrated at music festivals, awards ceremonies and on TV, reissued on countless record labels. Folk is a sonic "shabby chic", containing elements of the uncanny and eerie, as well as an antique veneer, a whiff of Britain's heathen dark ages. The very obscurity and anonymity of folk music's origins open up space for rampant imaginative fancies. At certain times, many of its champions have selectively cherry-picked from the entire folk canon: Ralph Vaughan Williams collecting ballads from the hamlets of Wessex and East Anglia; Ewan MacColl prioritising workers' and industrial songs; the Watersons setting pagan, seasonal music in astonishing modal harmonies; Shirley Collins and Ashley Hutchings focusing on agricultural and pastoral material from southern England; Fairport Convention and Steeleye Span applying electric jolts to the ballad form.